How Did This Cloud Of Dust Create The Earth? 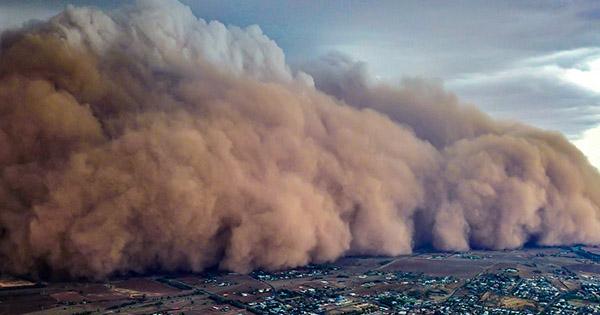 This cloud of dust is called a molecular cloud. This cloud is immense, several hundred light-years (a few billion km) in diameter. It is formed by debris of stars that belonged to a primitive universe, stars that would have exploded after consuming all their energy. During the explosion, the particles (including heavy elements (iron, nickel, aluminum, silicone)) made up these stars were vaporized throughout the galaxy. Then, under the effect of a force, gravity, these particles came together to form stars and planets.

Under the effect of gravitational forces, the particles of the molecular cloud agglomerated; then, for ten million years, the cloud slowly compressed under the effect of its gravity. This compression caused the speed of rotation of the cloud to increase. The energy released by the input of matter warmed the center of the cloud.

This rotating ball has become our Sun (1.4 million km in diameter)!

The rest of the cloud, the solar nebula, has stretched to form a disc of matter. The accretion of particles allowed the formation of larger objects: planetesimals (a few meters to a few tens of meters in diameter). The birth of the solar system would have lasted 10 to 15 million years.

When two salt crystals collide in weightlessness, it creates an electrostatic charge that forces them to clump together. If we shake the plastic bag containing the cluster, it disintegrates, but the cluster is reformed as soon as we stop.

This first phase of the Earth’s existence (dust clusters) would have taken place 4.5 billion years ago. When this cluster reaches a sufficient size (800 meters in diameter), its mass is so great that it sucks up the dust present in the surrounding disc.

For about three million years, these clusters will come together to form around twenty protoplanets in the internal solar system.

Then the protoplanets collide and merge to form a few planets, including Venus, Mercury, Mars, and Earth. Our Earth would have formed over approximately 30 million years; what remained of the cloud gave the asteroid belt from which most meteorites originate. Random shocks led to the formation of bodies more significant than those already formed or to their disintegration.

The temperature of this early Earth is around 4700 ° C (heat due to collisions). This Earth is therefore formed of molten matter. Gradually, the Earth cools, the lightest elements rising to the surface and the heaviest (iron) sinking to form a core. The solidification of the Earth’s inner core is said to have started 3.5 billion years ago. Check for earth development

The initial terrestrial material consists of more than 85% iron in reduced metallic form and less than 15% in oxidized metallic form (these proportions were obtained from the analysis of chondrites).

The carbonate meteorites known as CI (carbonate type Ivuna) would have a chemical composition that would approach the primitive solar nebula. However, this material was initially very oxidized. To be able to form the planets, this material had to be reduced.

Important Questions to Ask Before Hiring a Painter

Finding the best architecture firm is not easy

Selecting an Architectural Style for Doorways